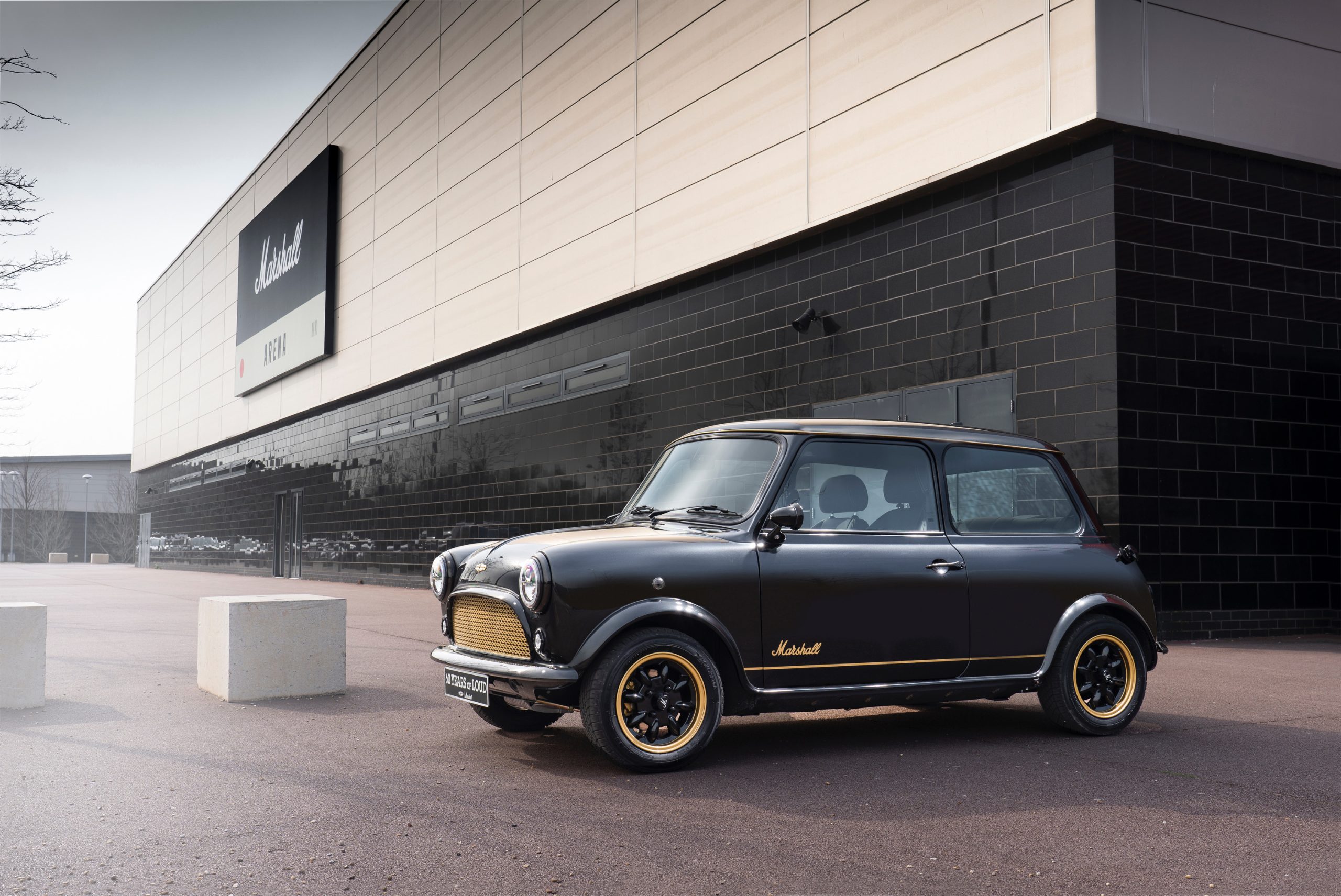 Make some noise for Marshall Edition

– Mini Remastered Marshall Edition to sport a unique set of styling and audio equipment features, developed in collaboration between the two British brands

– Just 60 examples to be built, available in both right and left-hand drive

– For each sale, both companies will make donation to UK charity, Music Venue Trust

Each Mini Remastered Marshall Edition will be distinguished from core Mini Remastered examples by unique colour, materials and finishes, inspired by the styling of Marshall’s iconic products, and will also be fitted with a number of unique touches that reflect the rich heritage of the iconic audio brand. Design elements evoke the iconic visual identity of the Marshall brand, whilst a comprehensive list of audio equipment is also installed – including a bespoke Marshall amplifier in the leather-lined boot – all paying homage to the Milton Keynes based company’s reputation for sonic excellence.

Externally, Mini Remastered Marshall Edition is set apart by its bespoke colour scheme, unique to these limited run cars. The cars will be finished in an exclusive ‘Marshall Black’ paint, complemented by dark-chrome exterior brightwork, contributing to a sultry, rock and roll air. The darker features are offset by contrasting ‘Marshall Gold’ painted accents: a coachline to the roof, as well as a hand-painted coachline, pinstripes and Marshall logos to the side doors.

The use of the Marshall signature colours is continued around the car; ‘Marshall Gold’ brake callipers gleam behind the ‘Classic’ 12-inch wheels, capped off with Marshall ‘M’ logo centres, and wheel rims finished in the same gleaming gold – a colour long synonymous with the Marshall brand.

At the front of the car, a contemporary mesh grille designed to look like the front of Marshall’s audio equipment is also finished in gold while hand-made, unique badges to the model have been developed, featuring ‘Marshall Gold’ enamelling.

Moving inside, the Mini Remastered Marshall Edition’s exquisitely appointed interior again sports many unique features, specifically developed for this special edition. The themes of the exterior design continue, with gold finishes to the dashboard centre, switchgear, and control panel, as well as the handbrake grip, sculptural side door panel blades and gleaming door releases.

Mini Remastered Marshall Edition’s pedals are also set apart from those on other Mini Remastered models. Finished in gold, they are specially engraved with ‘skip track’, ‘pause’ and ‘play’ motifs, another nod to the Marshall’s rich musical heritage. The door cards are also unique to the limited run specials – with a specially-sourced fabric that pays homage to the speaker covers on Marshall’s much-loved amplifiers.

The seats, immaculately finished as with all David Brown Automotive creations, are hand-trimmed in exquisite black leather of the highest quality, complemented by gold contrast stitching, while the back rests are adorned with embroidered Marshall logos, further elevating the special, limited run cars. Marshall Edition’s provenance is confirmed by a build plaque fixed to the inside of the glovebox.

As one might expect, audio upgrades are also central to the Marshall Edition Mini Remastered; the special edition is packed with unique features developed in partnership between David Brown Automotive and the engineers at Marshall. The result is befitting of a car that bears the name of such an iconic audio equipment brand.

To start with, Mini Remastered Marshall Edition features a meaningfully upgraded in-car sound system; with new dashtop-mounted tweeters, additional speakers in the doors, and upgraded equipment fitted to the rear parcel shelf, this is a classic Mini with a powerful, truly pure, modern audio setup, one that can envelop the occupants in rich sound. The glove box also features an induction charging point for Marshall’s just-launched Motif A.N.C wireless headphones.

In addition to the cockpit’s audio upgrades, the music-theme of Mini Remastered Marshall Edition really comes to life in the leather-lined luggage compartment. The space has been specially engineered to house a fully-integrated Marshall DSL1 Combo amplifier that slides out for access, linked up to an independent power supply for total versatility. The comprehensive audio package is rounded off by a powerful Marshall ‘Emberton’ portable Bluetooth speaker, also neatly integrated into the boot.

Marshall and David Brown Automotive will each donate a portion of the proceeds from each sale to the Music Venue Trust, a charity that supports independent concert venues throughout the UK, helping them withstand the damage caused by of the coronavirus pandemic, and emerge from the other side.

“We’re proud to partner with Marshall Amplification. We are hugely influenced by music and to partner with such an iconic brand to create this very special Mini Remastered, and to help them celebrate 60 years in business, a momentous milestone, was an opportunity we didn’t want to pass on. It seems fitting to unite the classic Mini and Marshall – two British icons – and in doing so to inject the Mini, a favourite among music stars through the ages, with serious rock and roll appeal. We’re delighted with the resulting car.

“We at David Brown Automotive are also proud to be supporting the Music Venue Trust, in partnership with Marshall, a fantastic charity doing its utmost to restore the UK’s independent live-music scene after such a challenging period.”

“This project has caused great excitement at Marshall. Mini Remastered Marshall Edition is a truly stylish and fitting way of celebrating our diamond anniversary, uniting our iconic, proudly British brand with a stunningly reimagined version of an iconic design, likely Britain’s most loved car; it’s a perfect match.

“We’re also thrilled to be supporting the Music Venue Trust with this partnership. It’s an organisation extremely close to our hearts at Marshall, and we’re looking forward to helping them continue their vital work, getting the independent venues, and the UK’s independent music scene back on their feet after the shock of the recent years.”

The ultra-exclusive, stylishly modernised Mini Remastered Marshall Edition is offered in both right and left-hand drive configurations and is available to order now directly through David Brown Automotive or through their rapidly growing network of international distributors. Pricing is available on application.