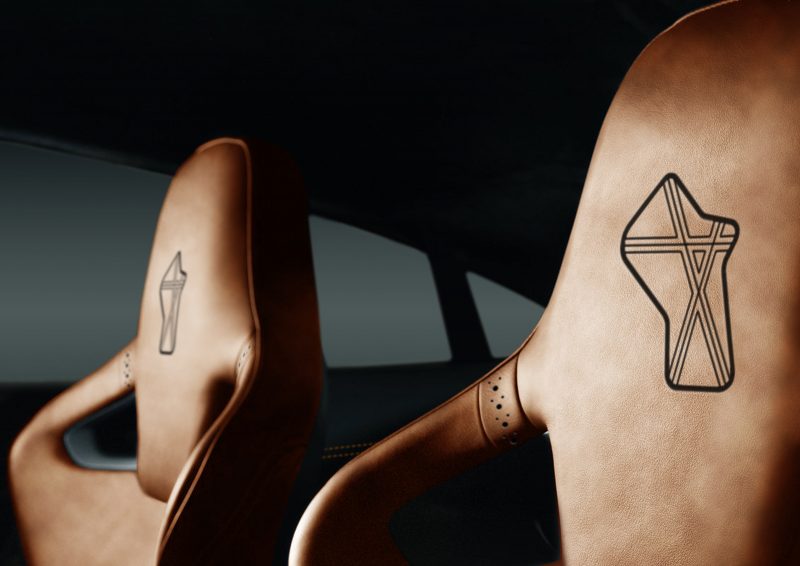 The covers will come off David Brown Automotive’s most performance-focused model ever on Tuesday, 6th March at 11:45 CET / 10:45 GMT in Hall 2, Stand 2142 in Geneva. The limited-production car will feature levels of intricacy and craftsmanship reflective of its high performance stature.

Further to the monotone, hand-enamelled bonnet badge image and Silverstone Edition logo side strakes shown so far, the latest teaser image gives a glimpse inside the performance Grand Tourer’s cockpit. The stylised outline of the former airfield past of the famous Silverstone Circuit is embroidered into the ’Antique’ tan leather sports seats which also boast intricate ‘broguing’, a method that is rarely seen in the automotive world due to its delicate complexity. Taking clear inspiration from iconic 1960s racing GT cars, Speedback Silverstone Edition will use full LED lighting, with dark ceramic and brushed chrome headlamp surrounds, hinting towards both technical and more menacing styling.

“The aeronautical and motorsport design details of the Silverstone Edition add up to offer the ultimate performance Grand Tourer,” said David Brown, company founder and CEO. “Not only have we shaped the car to be visually striking, its sporting visual appeal of the car is boosted by the car’s outstanding performance credentials. Speedback Silverstone Edition is true to form, delivering over 600 horsepower, and we can’t wait to reveal all in Geneva.”

The full price of the Speedback Silverstone Edition will be announced when the car is unveiled.